In less than two years, a relatively new compact class of Robert Allan Limited tugs designed exclusively for Sanmar, Turkey’s leading tug builder, has received international acclaim – resulting in an order from PKL Flote of Latvia. This order follows universal praise of the Sirapinar Class from owners in the UAE, UK, Spain (2 units) and Italy (2 units). Currently in build, Sırapınar VII is already earmarked for the same Spanish owner whilst two more of this type are in build in the certain knowledge, says Sanmar project director Ali Gürün, that they will soon be snapped up by customers requiring urgent delivery.

The vessel provisionally named Sırapınar VIII spreads the appeal even further having been ordered by PKL of Latvia at a ceremony which took place at Tuzla, one of two custom built yards of Sanmar. This was followed by a keel laying ceremony in the main construction building. “Sanmar won the contract because we were very impressed by the quality of Sanmar’s workmanship after visiting their workshops, the tug’s reasonable price and the very fast delivery (not from stock but really new-built especially for us)”, says Sergejs Odincovs, chairman of PKL. “Looking at existing tugs, we were very impressed by the assembly quality, which looks more like an art than a craft,” he added.

The Sırapınar Series of ASD tugs, launched as a concept at the Tugnology 2017 Conference, adopts the principle of needing to pack as much power as possible into a compact hull. Gürün added: “The industry is under the challenge of ever tighter cost control and the only way to achieve this is to have more bollard pull in compact hulls with low operational and maintenance costs. This new design, which is exclusive to us, combines these attributes”. 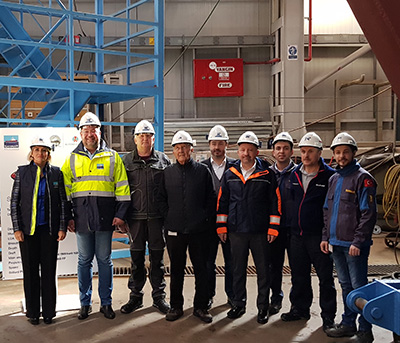 Sanmar contracted with Robert Allan Ltd to design a ‘little sister’ to its highly successful Boğaçay series tugs. The result is this compact yet powerful 22.4m design. The series builds on the success of its bigger sister, of which over 30 have been constructed. The hull of the new 22m tugs is similar to the larger model and can run astern at high speeds, whilst maintaining good control and directional stability in all directions and, importantly, can sustain a bollard pull ahead of 50 tonnes from a machinery installation of twin Caterpillar type 3512C diesels, each of 1,500kW, driving Schottel type SRP 360FP Rudderpropellers mounted aft.

PKL Flote, a member of the Alfons Hakans group, is a tugboat company which specialises in harbour and sea towage in the Latvian ports of Riga and Ventspils. It has six modern and powerful ASD tugs and the entire group owns and operates more than 50 tugboats, barges and workboats.