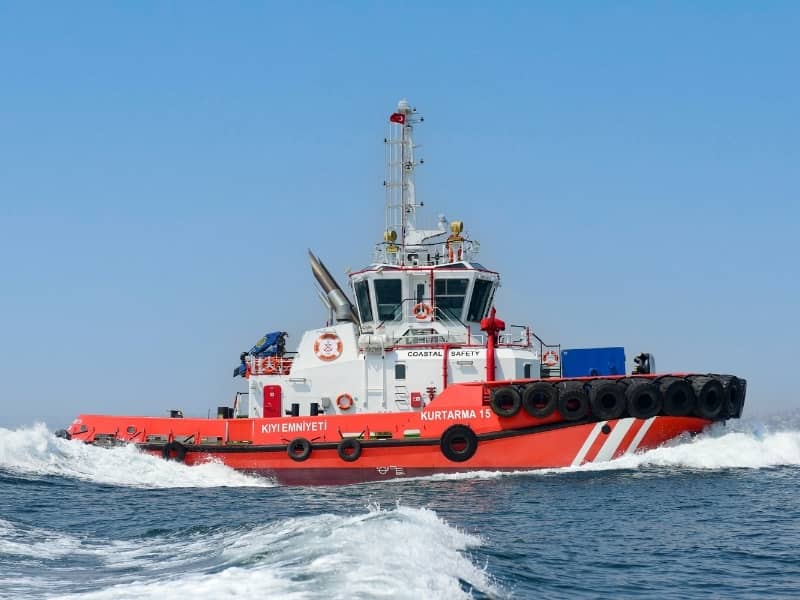 Sanmar has delivered the most powerful escort tug ever built to Turkish Directorate General of Coastal Safety which, among other things, operates tugs used for emergency response escort services and assistance towage in Turkish waters.

Renamed KURTARMA 15 by its new owners, the new-build escort tug is based on the exclusive-to-Sanmar RAstar 2900SX design from Canadian naval architects Robert Allan Ltd and is powered by two MTU 16V 4000 M73L main engines each producing a hefty 2,700kW at 1850 rpm to drive Schottel ASD units to achieve a Sanmar’s the most powerful bollard pull yet, well in excess of 90 tonnes.

KURTARMA 15 will take pride of place as the most powerful escort tug in the Directorate General of Coastal Safety fleet.

The RAstar escort/offshore terminal tug designation is reserved for a distinctive class of ASD escort, coastal and harbour tugs, designed with the unique sponsoned hull form developed exclusively by Robert Allan Ltd, which provides significantly enhanced escort towing performance. Escort forces are enhanced by the effects of the sponsons as well as by the prominent foil-shaped escort skeg forward.

Previous tugs in the range from Sanmar have had accommodation for up to eight crew, but this has been expanded to ten crew on KURTARMA 15. All accommodation complies with MLC standards, with the captain and chief engineer’s cabins with en-suite WC and showers above deck, along with the mess/lounge and a separate galley, and four person cabins with shared two WCs and showers, and a laundry below deck.

Ali Gurun, Vice President of Sanmar, said: “The service that Directorate General of Coastal Safety provides in Turkey’s coastal waters is vital, their crews save lives and prevent disasters time and time again, often in very challenging conditions. At Sanmar we are proud to be able to provide them with a tough, technologically-advanced and powerful new tug that is ideally suited to help them carry out these essential operations. We have worked closely with both Directorate General of Coastal Safety and the designers to match and often exceed their specifications.”

He continued: “KURTARMA 15 is an important project for us, and for the ongoing development and enhancement of this range of enormously powerful, yet manoeuvrable and extremely stable tugboats.”